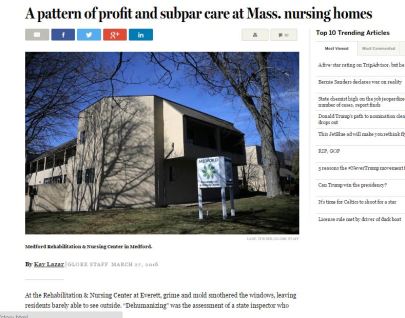 As The Globe heads for another round of buyouts,  consider one of many reasons we so need a robust news operation in town: your parents.

Or maybe your grandparents. Or anyone who lives or works in a nursing home in the state. Kay Lazar has been doing some great reporting on conditions in and regulation of nursing homes.

I covered this beat in NC in the 1990s,  so I know the kind of dark places she’s had to go to get these stories. (I count the state Department of Public Health — super uncooperative about public records — among them.) I started reporting on the low fines North Carolina was issuing serious violations of are rules.  After a couple months of this, a county inspector told me this: one home owner said: I don’t care how much you fine me, just keep me out of the paper. When our news operations are diminished, she’ll get her wish.

A small sample of Lazar’s work:

A pattern of profit and subpar care at Mass. nursing homes

The Globe scrutinized the 2014 financial reports, the latest available, from 396 Massachusetts nursing homes and examined the money spent on nursing care, patient food, management, rent, and fees for therapy, office support, and other services. Also examined were health and safety violations for each nursing home.

For-profit nursing homes, which constitute three-quarters of those in the state, frequently devote less money to nursing care, compared to nonprofit homes, the analysis showed.

Nursing homes are being bought and sold in the United States at a rapid clip, raising questions about the quality of care, according to a Harvard University-led study published Monday.

Corporate owners appear to target nursing homes beset with problems, and the difficulties — notably health and safety violations — often persist after the transactions, the researchers found.

Over the past year, a portrait has emerged of substandard care in many of the nursing homes run by Braemoor’s owner, Synergy Health Centers. Poor treatment of patients’ festering pressure sores. Medication errors. Inadequate staff training.

Now, a Globe investigation shows that as father and son were paying themselves handsomely, Synergy apparently provided false information when applying for nursing home licenses. The Globe’s review also found that Synergy and its affiliated companies assembled a string of 11 nursing homes with little state scrutiny of the backgrounds of top executives, including Larry Lipschutz, who faces tens of thousands of dollars in fines because of previous business dealings.