Skip to content
HomeNurses and nursing homes: Watchdog health reporting at the Globe 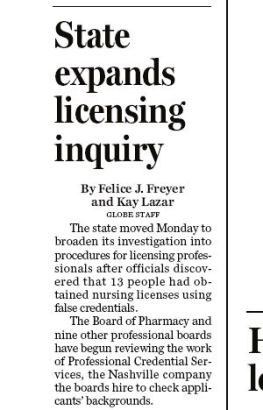 How evil is it to charge people for Alzheimer’s care and not deliver it? How dangerous is it for people to go around saying they’re licensed nurses when they are not?

Stuff like this is hard to track because, last we checked, the people in charge of records like these were not real helpful.  Liberal Massachusetts is known for its strict public records laws.

Kay Lazar of the Globe had this yesterday:

State regulators are citing more than four dozen Massachusetts nursing homes for advertising dementia care services when they don’t actually offer the kind of care required to make such a claim, according to the Department of Public Health.

Lazar and Felice Freyer had this Sunday, with a follow up Monday:

Massachusetts regulators revoked or suspended the professional licenses of 13 nurses after discovering recently that the health care workers lied about having nursing degrees or being licensed in other states, health department documents show.

The action sparked questions about the background checks state regulators rely on to issue licenses to thousands of nurses and applicants in 10 other health fields, including pharmacists, psychologists, podiatrists, and optometrists.